The Mocks are Approaching

This Friday we have the mocks, I can’t believe it. It’s really annoying because the mocks it’s what is going to tell me if I’m able to go to a university in Spain or not… And it’s in 2 days! But well I’ll suppose I’ll be fine, because there is nothing more than I could do. That is really important, when you have an exam you have done the best that you could have, there is no point of complaining before it, you won’t be able to change it.

But well we just had Christmas, and this was really nice, I went to France for a few days, but sadly it didn’t snow… In Mallorca we don’t have much snow, so normally when we go to France my brother and I don’t get inside for a minute, because we play with it, and when our cousins come to the house they are so sick of us… It’s hilarious! And then, after those horrible mocks, Clara is going skiing! I’m so excited, the last time I went skiing was when I was in first year, so long ago, incredible.

And now that the mocks approaches, and they are the last exams before the Leaving Certificate, everyone is thinking on after the Leaving Certificate, this awesome summer that we are going to spend doing nothing. And me and three more Friends already did something last year, and we would love to repeat, but this year more people is coming, and this is kind of a problem, because there is nine of us, and there is no way we can decide something that everyone likes. For example, I would love to be able to have water sports nearby, and then someone else just want to party all day, and it would be fine, but in the moment it prioritizes one of the sides it’s not good anymore, because someone find something bad, either the flights are to expensive or the swimming pool is not warm enough… I don’t know, it’s just weird, and because of this I’m getting even more stress right now it’s too much. But it’s fine, because at least there is someone here that understands me, and I think that is the most important think when leaving your home, with your family and Friends, to find someone that will understand you, and will be there for whatever you need, it doesn’t matter if it’s your roommate, or your guardian, but someone that will liberate you from some of the weight. 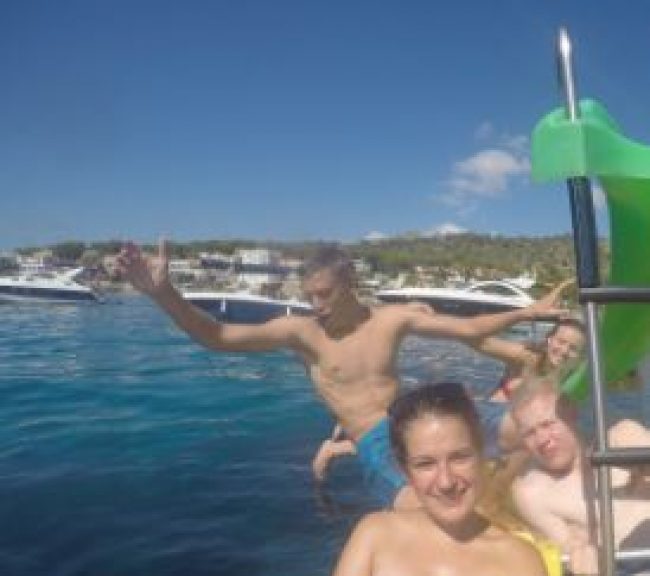