My first two weeks in England

Right now, I’m sitting on my bed in my new room. It’s been two weeks since my arrival on my study abroad programme in England, and I’ve already managed to make my bedroom totally messy. Now, let’s talk about something more relevant.

I’ve spent last two weeks of my holiday on a summer camp with my drama club. We had loads of fun and we’ve created a lot of happy memories. On the last night, we stayed up and we said our goodbyes. I got a framed photo of us as a present. We cried in the morning, but it was beautiful night, one that I will remember for a long time.

When I arrived home, I had only two days left to pack myself and say goodbye to everyone. It was a busy time. I’ve met with my other friends but there was no time to meet everyone I wanted to. I also had to prepare my things. That was hard. I don’t really know how I decided what I need and what I don’t. I just put everything in the luggage and when it was full, I stopped. Although I was quite happy with the way I packed my things, I still had to go shopping during the first weekend to get everything I left at home. I also must add that I had to pay for an extra luggage and also for extra weight at the airport. So, don’t pack like me!

My father dropped me off at the airport, but once I went through the security check, I was on my own. It was the first time I flew without my parents and I was a quite worried. Luckily everything went smooth and after two hours of sitting in the plane I finally arrived to Great Britain. High Schools International arranged for a taxi driver to pick me up from the airport and drive me all the way to my host family.

During those two last days, I was getting more and more nervous. But it still seemed like I haven’t even realised how scary the situation actually is. It all fell on me when I was standing in the middle of my new room, unpacking my things and for the first time I realised, that I’m on my own in a foreign country. Suddenly I was terrified.

The first day of school, at least for international students, took place on the 1st September. It was quite boring and we only did some paper work and other formalities, but I left the school totally exited and finally happy. One of my greatest worries was being lonely and that I wouldn’t find any friends. But just as I walked in the room, other students said “Hi” to me, as they did with everyone, and started talking. Everybody was so friendly and everybody was in the same situation as me. We were all new; we knew nobody and we all wanted to make friends. And it was really easy. I’ve met so many amazing people, it took me ages to memorise their names. I instantly became friends with two girls from Slovakia – our languages are very similar, so we understand each other when we speak our first languages. And we’ve already made plans to go shopping to Bournemouth on Saturday. Everything went easily and suddenly I was not nervous at all. I was happy. During the next few days we did some more paperwork and we were given a tour around the school. I was completely lost. Brockenhurst College is composed of many randomly placed buildings and it’s huge – at least compared to my old school. We also did some teambuilding exercises, including building a raft from barrels and wood, floating on them and climbing on a climbing wall.

During the dinner I also got to know my host family a little. My host mother Jessica is midwife and she is also finishing studying psychology. She was born in France, studied in America and she lives with my host father Kevin in UK. Kevin is a teacher and he also loves playing the guitar or running. They have one daughter and two sons, but they are already adults and they don’t live with us. Only their youngest son Shane is staying here. He is twelve and he has just started his first year in a new school. I think that they are really nice and I like chatting with them.

On Monday (7thSeptember) school started for the British students as well. Suddenly, there was no space in the train I take to school. I had to stand, stuffed between the other passengers. I didn’t have to remember my way to school anymore; I just followed the huge crowd. I also had my classes for the first time, but I will write more about that in my next blog. By then I will have gained more experience in that area. 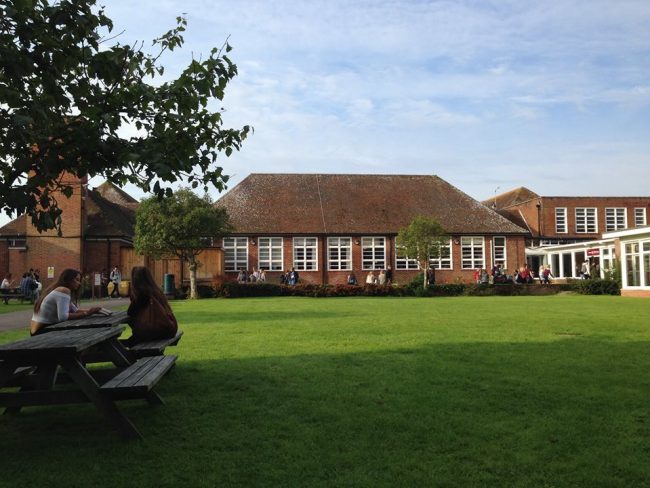