My Christmas in Czech Republic

The time finally came! School days were over and I was about to meet my family and Czech friends again. However there was quite long journey ahead of me. As I’m not very fond of traveling on my own and I often get nervous, I was absolutely delighted when Penny offered me to sleep over at her place in Reading before the departure. Her house is about 30 minutes by car from the airport and her parents were so kind to take me there, so I had fewer things to worry about. The journey went smoothly and soon I was in my apartment again with my family.

This year, I enjoyed Christmas even more then I usually do. Being apart from everyone for all this time made me appreciate every minute we spend together. In Czech republic, Christmas isn’t that different from Christmas in other countries. The main event is without a doubt giving and receiving presents under the beautifully decorated Christmas tree. In Czech republic however, we do this tradition in the evening on 24th December, after the dinner. Our traditional food is carp with potato salad (mashed potatoes with mayonnaise, egg, cucumber, onion, paper and some other things). In my family we add cabbage soup, known as “Kapustnice” to the menu. We also eat traditional sweets during the whole holiday. In the morning on 24th December my sister and me went to the Zoo with my aunt and uncle and their two little daughters. There was a special event that day and we could watch feeding of some of the animals accompanied by educational comments or funny stories from the Zoo. My little cousins were excited about the zoo and also about my sister and me, as they haven’t seen us for quite a long time. About the gifts, I think that everybody enjoyed the presents I brought them. For me, the best presents were books. Here in UK, it is quite complicated to come by a Czech book, so I’ve been mostly reading them in English. Many people remembered that and gave me some book translated to Czech, so now I can read in my own language again!

Meeting with the whole family was exhausting, but completely awesome at the same time. Of course, my little cousins almost hugged me to death and I had to describe the same stories over and over again, but it felt great. I also managed to meet most of my friends. We went to a teahouse with my Drama club and spend there six hours – I believe that’s the longest time I’ve spent in a place like that. We just talked for the whole time and now I know pretty much every major event that has happened to them ever since I’ve left. Then I’ve celebrated New Year with my friends from scout. We slept over at our scout base and we all had great time.

My journey back was a little complicated. There was no problem during the flight, but when I arrived at Waterloo train station there was an unpleasant surprise. All trains between Southampton and Pool were cancelled due to some major repairs on tracks. Because of that I had to go by train to Southampton, there find a bus going to Bournemouth and from there take a bus to Christchurch. Of course, I didn’t check my journey ahead of time, so I had to plan everything on the spot. It was not so difficult, but I always tend to panic in situations like these.

Now I’m happily back. First few days were a little weird and I missed my home a lot, but now I’ve already got used to this life again and I have other things to worry about. As we’ve finished half of the AS topics in most of my subjects, we are doing the mock exams. Which means a lot of studying and practising exam questions. However, we still have time to have fun. Two weeks ago, we went for a walk to the beach and this week we watched the film Revenant in Bournemouth cinema. Some of the international students that are studying here only for half a year will be leaving us soon (among them is also my best friend Tanya), so we are trying to spend as much time together as possible. Tomorrow we will all have a dinner together to say goodbye to Helena, who is leaving three weeks earlier and to celebrate Tanya’s birthday. 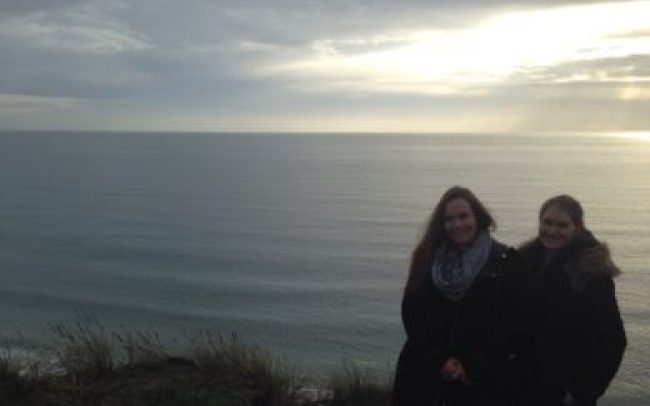