Kristine shows her family and friends around Ireland!

Hello again! Time to talk about what I’ve been up to the last few weeks. So, as I mentioned in the last post we had our midterm in the middle of February. My sister and her boyfriend came to Dublin to visit me and we stayed in an Airbnb in town.

The weather was awful, but I showed them around town, we did some shopping and we had food at the best restaurants! I had an amazing time with them and it was kind of sad when they left…

BUT, my friend Malin came to visit the day after. She stayed with me at my host family’s house for three days, and we had so much fun! We did some shopping, had food at Eddie Rocket’s and she got to meet my friends here in Ireland.

Wednesday of the midterm was my Italian friend Lia’s Birthday, so we went to Hard Rock café for lunch to celebrate. The food was really good and Malin got along very well with my friends from here as well! 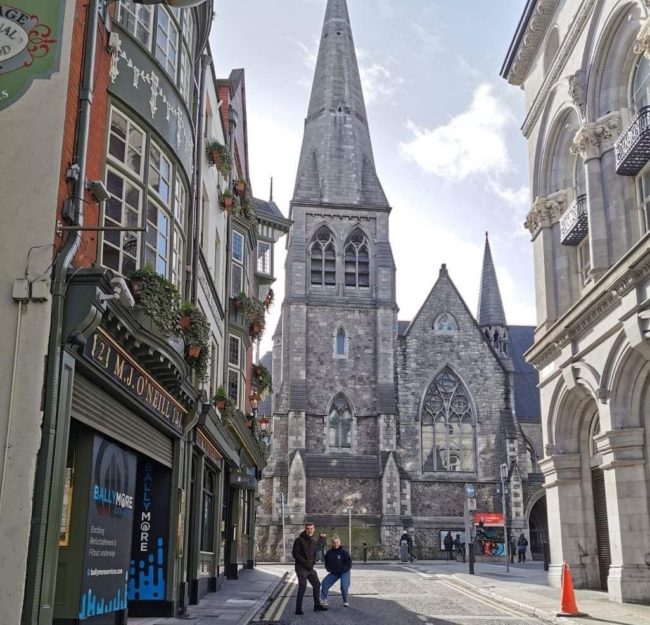 Of course it was sad when Malin left too, but the day after she left I went to Italy to visit my friend Nina. I flew to Munich in Germany and we stayed there for one night in a hotel! I have never been to Germany before so it was really nice to stay there for a bit and see Munich. I arrived on Friday night, so we stayed in the hotel from Friday to Saturday.

We woke up early Saturday morning and had a nice hotel breakfast before we went to the city to look around and do some shopping. After a little while in Munich it was time to start driving towards Italy (Of course Nina’s parents were the ones driving, haha). We drove through Austria and to Italy and it took about 3 hours. Nina lives in a small village, in the north of Italy, called Nova Levante or Welschnofen (which is the German word for it).

It was such a beautiful village with about 2000 inhabitants. I think it is really cool, because they speak German in that village, but they all know how to speak Italian. In the nearest city, Bolzano, people speak either German or Italian, so they all just have to learn both.

Anyways, Let’s talk about all the fun stuff that we did in Italy. First of all we had real Italian pizza and I got to meet Nina’s friends. We also went downhill skiing and shopping in Bolzano. And last, but certainly not least, we celebrated carnival!! We don’t have anything like that in Norway, so I absolutely loved it.

During the day there was a parade where wagons with different topics were driving through the village playing loud music. The small village was so crowded and everybody was dressed up. The parade was so cool, but it only lasted for about one hour. So after the parade Nina and I went to her house to have dinner before we went back out again. In the evening there was a party for the whole village.

It was so nice, because there were people of all ages and a band playing. I was scared that people wouldn’t talk to me because I was the only one there who couldn’t speak German or Italian, but people were so open and welcoming and I got to know some really nice people.

This was one of the wagons from the parade, with ABBA as their topic! The other picture shows me dancing to the music. Nina and I just wore old overalls that we painted lots of flowers on, and they actually turned out pretty cool. 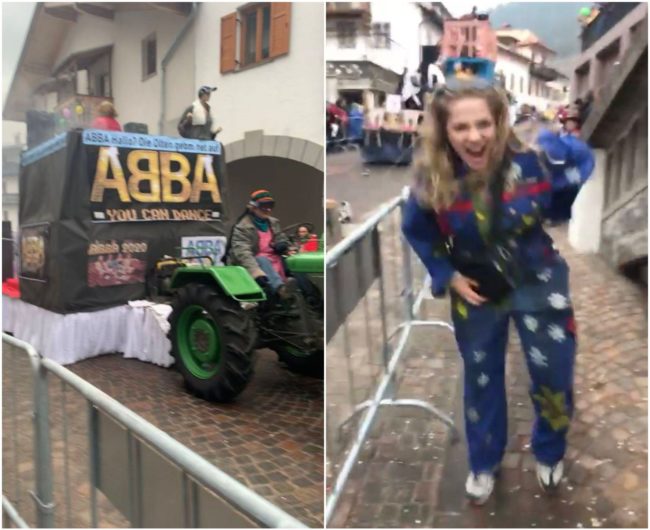 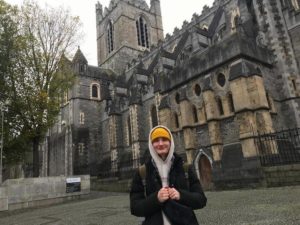 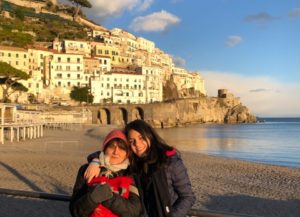